Once, not very long ago, we bought a house in the woods. It’s no longer as “in the woods” as it used to be, both through our own actions and because the stupid trees keep falling down.

It’s gotten worse. A large part of the problem is the ivy, which kills trees if left unchecked. We’ve cut down a lot of ivy and made sure the trees nearest to the cleared areas are healthy, but there are a lot of trees, and there’s a lot of ivy. And sometimes those trees you hadn’t quite gotten to yet are tired of waiting.

In winter of 2015, one of the trees on our property started to slide towards the house. It was located on the property line between our neighbor’s house and our own, and we decided to go ahead and take it down before it fell. This was the seventh large tree we’ve removed since moving in, and the second one that we had to race to remove before it smooshed the house. Later that spring, a neighbor of ours wanted to test out his new stump grinder, and he took out a bunch of these stumps in exchange for a case of Michelob Ultra and a gift certificate to Outback Steakhouse. This is an accepted exchange rate for stump removal in North Carolina, if you’re curious.

We got through an entire summer in which no trees fell down at all! None! It was amazing! Then, in early fall, I sit down on a pleasant Sunday evening to color a comic and livetweet the Masters of the Universe movie when

After the inevitable Dogsplosion, I go outside to see that a large tree with twinned trunks has split, and the trunk closest to the house has fallen down.

The trunk had rotted out. Now, please note there is very little ivy on this tree; it’s one of the ones we cleaned off to make sure it wouldn’t…become weak…and…fall……on……sigh.

The tree was within ten feet of the pool, and it just barely missed the equipment that we had recently moved as part of the foundation repair prep work. If it had smushed that equipment, we would have filed an insurance claim. As it was, our previous near-misses with trees and insurance companies had chilled us to the bone, and we wouldn’t have gotten the insurance folks involved at all… Except that other half of the twinned tree? It was aimed directly at a neighbor’s house. So we did the sensible thing, which was to call the tree guys and set up an appointment, call the insurance company and say that we’re aware of the situation and have taken steps to resolve it, and then knock on the door of a neighbor we had never met before and tell her that she might want to consider sleeping on the other side of her  house.

Then we crossed our fingers and hoped the tree company could get out there in time to take it down before it fell.

The second trunk crashed down in the middle of the day and missed the neighbor’s house (YAY!). But, now that it was down, insurance had to get involved (BOO.). Somewhere during this mess, the insurance company learned that the woman who was happy to accept the check for tree removal was a renter, not the owner, but that wasn’t our mess to solve (YAY again!).

Anyhow, it was all resolved with a lot of shouting and heavy machinery and our insurance rates going through the roof. Again. 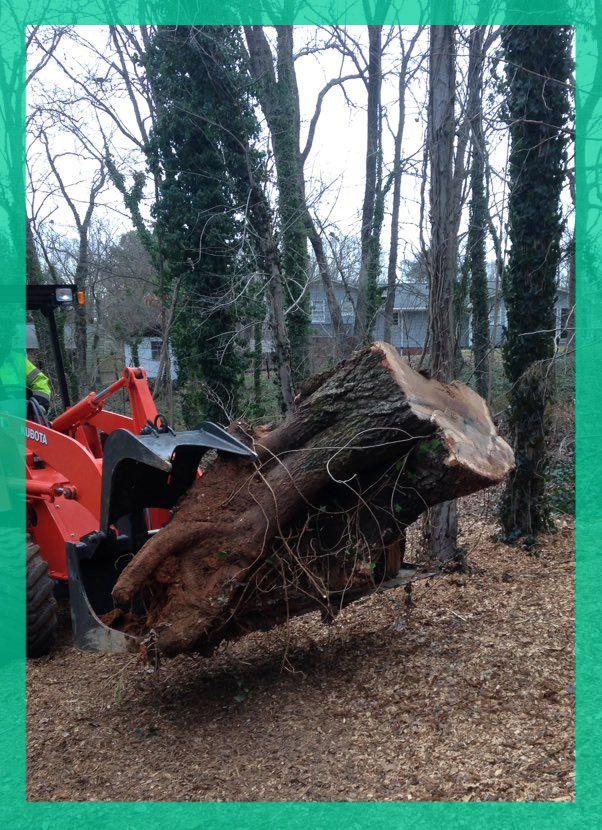 Getting the fallen tree removed was good, in that we no longer have a healthy-looking but rotted tree dangling over the pool. But now we’re really worried about the other healthy-looking trees that were covered in ivy so long that they’ve suffered irreversible root rot.

Oh. And the neighbors took the insurance check but never bothered to get the other half of the tree removed.