Thanksgiving looms.  Thanksgiving looms large.  We had two major projects to finish before family arrives.  The first was the small bathroom, and the second was the landing between the primary fence posts.  The weather was lovely last week, so we flipped these and went after the landing first.

Let me put up a picture with the area in question mapped out for clarity:

That purple area is a slope which somebody decided to cover in bags and bags and BAGS of driveway gravel for traction.  It wasn’t an unmanageable slope, but the slope and the gravel didn’t do anyone any favors by being there, so they had to go.   Brown and I got started last weekend by carving out the space for the landing and roughing up the dig site, and from Monday through Friday I cut out the rest and hauled dirt

By Saturday, we had achieved had a nice, flat landing about 15 feet long and 5 feet wide.  The cut was 9 inches down at its deepest point, but since the slope didn’t start out being level it was only about 5 inches down at its shallowest point.

(I should mention this is also part of the drainage project, as the overall angle of the slope pointed down towards our house, specifically at our basement.  Leveling this area has changed the path of the water, but probably not in a way that will solve the worst of the flooding.)

Brown placed a spare 4×6 to form an erosion barrier against this wall.  We stabilized it with some leftover 18″ landscaping spikes we had used to make the garden stairs a few months ago. 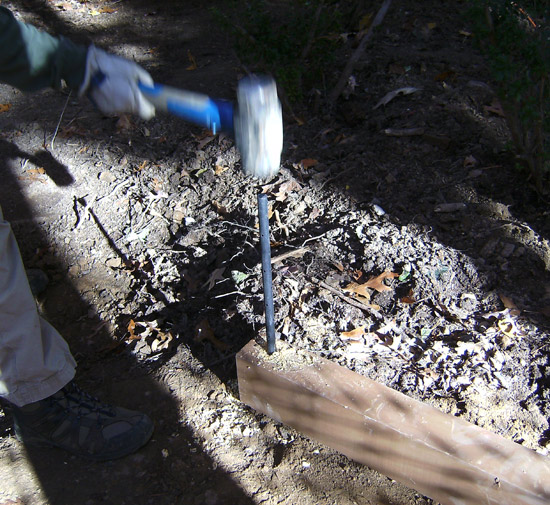 Then I threw a heck of a lot of dirt back on the area we had just cleaned and leveled, and raked it flat.

Why more dirt?  Because most slate pieces aren’t entirely flat and each piece needs to be cradled down into the dirt, or it will rock when you walk on it.  A thick earth bed will allow slate to sink and will stabilize them.

After the slate was positioned, I dumped another wheelbarrow full of dirt on them and raked it into the cracks.

Then I ran the soaker hose until the dirt turned to mud.  It will take a few rainstorms and several additional layers of dirt to stabilize these pieces, but they are fairly solid now.

And here’s the part where I tell you guys that in the spring, we’ll rip all of this out and redo it.

See, we needed to start working on the drainage problem and the landscaping, but our budget is such that we can’t do much.  After the holidays we can start dropping cash into the house again, but between then and now it is Not About Us.  Next year, we’ll take up the slate, re-level the ground, and remove the beam we put in to control erosion around the roots.  Then we’ll put in a couple of permanent stairs, a small retaining wall around the curved sections, and finish it off with a cement paver kit similar to the one on your left.

Not a bad temporary job, though.  It looks better and the family can walk into the back without falling down a tiny rock-encrusted hill.  Now if we can just get the bathroom done in time…